It’s been like two weeks since we got the Ovevo fantasy pro Z1 Bluetooth led speaker and the experience so far as been really cool.

Earlier before now, we did an unboxing of the gadget. If you missed the unboxing post which includes images, you can access it here.

Having used the gadget for about two weeks, I’d like to give my full review here and as always, I would pour out my observations here without being biased.

Just before we go into a full review of the gadget, you can take a look at the device’s specs below:

Compared to other Bluetooth devices I have seen before, the Ovevo fantasy pro Z1 speaker has got a really nice design. It isn’t just a speaker, it’s got a lighting system around it’s body which can be used for not just lightening purpose alone but as a lamp as well.

As earlier stated when we unboxed the device, it has got three layers; The upper, middle and the button.

The upper part consists of the function buttons as well as notification light placement. The middle layer is basically the compartment for the lightening system as well as the speaker.

The device just like every other related devices, connects via Bluetooth. Since there is no SD-Card slot on the device, a third party devices is needed before music can be played through the Ovevo fantasy pro Z1 speaker. You can also choose to connect using the 3.5mm in to in cable if the device you intend connecting to does not have bluetooth connectivity.

In regards the sound output, in all honesty, I am impressed with it. Considering the sound output as well as the lightening, the Ovevo fantasy pro Z1 can turn your room into a mini night club. 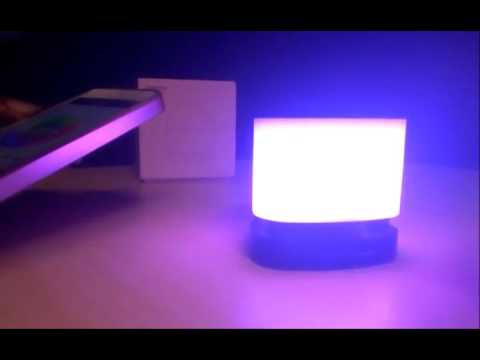 The Ovevo fantasy pro Z1 was able to last about 6 hours under intensive sound use. Leaving the device on standby can last up to 10 hours.

Charging the device to its fullest takes about 2 hours 30 minutes which is really nice. When connected to a smartphone (iOS or Android), the battery meter of the Ovevo Speakers shows on the phone’s screen. From there, you could monitor how the battery is used.

Using the device since day one has been fun. I personally love the gadget and everyone who’s got to see the device with me has always said good of it.

Although at a point, the device hanged and at first, I was sorta confused on how to fix it. Pressing and holding the function keys on the device fixed it and it has never happened again since then.

If you ask me if I recommend the Ovevo Fantasy Pro Z1 Bluetooth speaker, in all sincerity, I’d say YES! However, I wish there was an SD card support. Not everyone loves to play songs when they are busy doing other things on their phone. Most people tend to use such devices more when they are bored or just need something more louder than the default speaker and having to use a phone or MP3 devices every time may seem a little discouraging. That’s like consuming battery on two devices when only one would have been better.

If SD-card usage isn’t a concern to you, I would recommend the Ovevo Fantasy pro Bluetooth speaker over other few I know.