The Infinix Hot X507 phone was officially launched in November 2014. Although it was announced to be available on Konga by November 21st, it took much time than speculated.

But, we are happy to announce to you that we have got the device in our hands and the device is also currently available for sale on Konga.com online retailer shop.

Earlier before now, we had written exclusively on the specification, features and price of the infinix hot X507 device, although the specification and features still remain the same, a little adjustment has been made to the price.

Since we had written on the specification of the device earlier, we won’t be relating too much on that. However, we will be showing you the unboxing of the device here alongside a quick hands-on specs and review of the Infinix Hot Phone.

Just as usual, every device in the market as got a pack as long as its brand new. The infinix hot has got a nice looking pack colored white which is pretty sharpy and easy to carry with just one hand.

On the pack, its rightly stated on the front that it’s a 16GB memory size phone. considering the fact that infinix is also in partnership with etisalat, it’s clearly stated that you get 500MB free data on activation from etisalat and 100% instant bonus on all purchases of 200MB data and above for 12 months. Now, that’s a great deal for etisalat users when they purchase the infinix hot.

What’s Inside The Pack

Opening the pack, the first thing that says hello to you is the beautiful looking infinix hot phone. In our case, we got a white and Yes, am actually a fan of white phones.

Here are the list of what’s contained in the Pack;

That’s basically what comes with a mobile device. If you were expecting to see a power bank, sorry dearie, that’s not on the infinix hot. However, with a battery capacity of 2000 mAh, you shouldn’t worry so much about getting one unless you are a heavy user.

What’s The Current Price Of The Infinix Hot X507 Phone?

The infinix hot phone has got a pretty nice look. It’s back cover is made of plastic and has got a nice texture which fits very well in the hands. It’s also said to be glow cover but we are yet to actually confirm if it actually glows but I just got to admit that it feels awesome in the hands.

The infinix hot is a 5.0inch device with 5.0 IPS Screen (Not gorilla glass). The function keys are actually soft touch keys and that’s pretty cool hence, you don’t have to bother pressing but tapping instead.

The Phone isn’t weighty. Its pretty light. Hence, if you are the type that likes pretty light phones, this might just come in handy for you.

Looking at the back, its got a 5.0 Mega pixel camera which is clearly stated between the camera and the flash light, the loudspeaker is also located at the button side of the back and not to forget, the phone’s got a 2MP front camera which is pretty okay for video calling, skype, selfies and every other functionality that’s got a need for the front camera.

It runs on android 4.4.2 which is the android Kitkat version. Nowadays, speed is a necessity when it comes to using phones and it’s to that fact that the infinix hot comes with a 1GB RAM, A Quad core of 1.3 Ghz CPU frequency and a Mali 400 GPU.

Game lovers and those who enjoy multi-tasking shouldn’t have an issue with the device considering the specs. It’s an MTK device hence for those who may want to root and change IMEI for the sake of using glo bis on it, the process shouldn’t be difficult. However, please be aware that rooting voids your warranty. 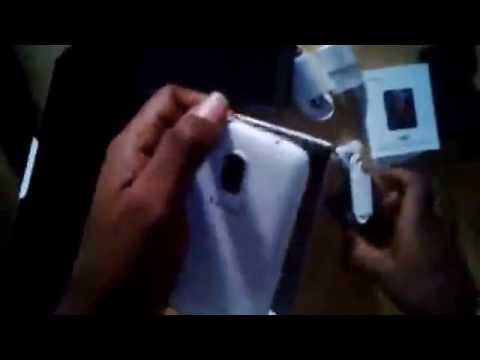 Guess that’s basically everything you need to know based on the unboxing and quick review of the device.

In the next couple of days, we’d be putting up a more detailed review of the device. However, why that is still cooking in the kitchen, you can ask questions regarding the device using the comment form and we will be sure to answer every of your questions.