Still on the latest smart phone from the infinix brand, we are gonna be doing a fingerprint and face ID unlock test between the infinix HOT S3X, and the Xiaomi Redmi 6.

Previously, we did a performance test between both smart phones. If you haven’t seen it, I would recommend checking that out. You will be surprised at the results.

The infinix HOT S3X and the Xiaomi Redmi 6 both feature fingerprint security and face unlock security. However, the HOT S3X has something that isn’t available on the Redmi 6. Just keep reading to find out.

It’d be nice to actually find out which is faster, right?

I already compiled a video which shows a comparison between both smart phones in terms of fingerprint security and Face ID unlock system. Hence, I would recommend watching the video below. 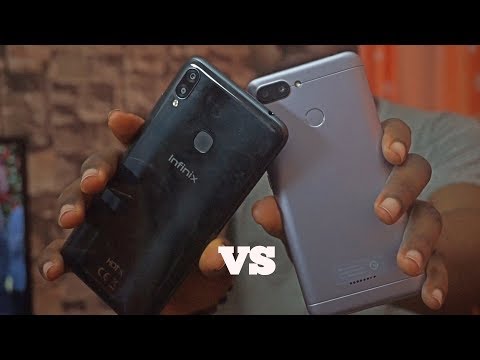 To get the full information, watching the video above is highly recommended. What you will be reading below, is basically a transcript of everything being said in the video.

First, we are gonna try re-registering both fingers on both smart phones. This way, everything we can be sure of whatever.

Apparently, the HOT S3x isn’t giving room to re-register both finger. Reason being that, both fingers are already registered.

The Xiaomi Redmi 6 on the other hand, accepts same fingers to be registered the second time.

Next, is the face registration for the face unlock security test. Since we already had the face registered on both smart phones prior to the comparison, we are gonna delete the data and re-register the face.

How long it takes on both smart phones isn’t recorded. Sorry.

Now to the test.

Let’s see that of the Xiaomi Redmi 6. Equally fast.

Now, let’s compare both devices to see which unlocks faster.

Which do you think unlocks faster? In my opinion, the Xiaomi Redmi 6 does unlock faster using fingerprint ID.

Let’s go over to the face ID unlock test.

Holding both devices, I will try using The Face ID unlock system under well lightened environment.

Which do you think unlocks faster?

How about a not so lightened environment? Precisely an environment that’s a little bit dark?

This is where the face ID unlock system on the Xiaomi Redmi 6 begins to flop.

It doesn’t seem to be working appropriately. However, using the infinix hot s3x front facing light as a guide, it properly recognizes the face and unlocks.

Hence, it’s safe to say that while the face ID unlock security feature on the HOT S3x works under any lightening condition, the Redmi 6 only works under lighted environments.

To the results, the Xiaomi Redmi 6 fingerprint feature unlocks faster. Same as the face unlock. However, the hot s3x works under poor lightened environment while the Redmi 6 for the most part, doesn’t or tend to misbehave.

While I will give it to the Xiaomi Redmi 6 for the Fingerprint ID test, the infinix HOT S3x is the winner in the face ID test.

Coming next, will be a full comparison between both smart phones and thereafter, full review on specific devices will be dropped. Hence, you should be on the look out for that.

If you have any questions regarding the Infinix HOT S3X and the Xiaomi Redmi 6, do not hesitate to ask. I’d be more than happy to respond.