So far this year, Tecno Mobile has launch a handful of devices. From the L8 to the W4 which was the first Tecno smartphone to run android marshmallow out of the box. Thereafter, there’s a W3 which is consider a junior to the W4. Tablets weren’t left out as Tecno launched the DroiPad 7c Pro amongst others.

The most recent, and perhaps, the most talked about will be the upgrade to last year’s Tecno Camon C8, known as the Tecno Camon C9.

A few weeks back, we unboxed the smartphone in pictures and ever since then, the smartphone has passed through series of test. Thus, we are bringing you a full review of the Tecno Camon C9. 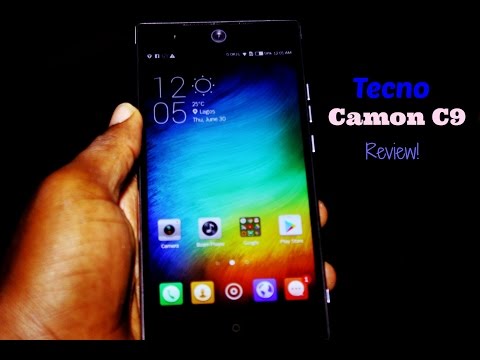 The Tecno Camon C8 was praised for it’s camera and this year’s Camon C9 is being marketed in same direction. How well does the smartphone live up to the hype, I guess we are about to find out.

The Tecno Camon c9 features a 5.5inch display with 1080p resolution, its powered by a 64bit MediaTek octa-core processor with 2GB of RAM, runs on Android 6.0 marshmallow and on top of that, you have Tecno’s own HiOS. The internal storage capacity is 16GB and that’s just the base. However, this can be expanded up to 128GB using microSD card.

In terms of design, I would say Tecno did a decent job. It’s got an aluminum unibody with smooth and nice looking trims but unfortunately, the back pack is actually made of plastic.

Although most people tend to say they prefer the Camon C8 design, I would say the C9 design still looks decent with a bit of premium look. Of course, it would have made more sense if the back pack wasn’t exactly plastic.

At the bottom of the device, is the charging port and the mic, at the right side is the power button and just above that, are the volume buttons. The top houses the 3.5mm jack port and at the left side of the device, you find no buttons.

At the back, is the 13megapixels rear camera and just below that, is the Led flash. Thereafter is the branding and towards the bottom of the back pack, is the Camon tag and the loud speaker. And oh, something I almost forgot to mention is the camera shutter button at the right side. Yes, down that lane as seen on the Camon C8.

As earlier mentioned, the tecno camon c9 runs on Android 6.0 Marshmallow OS and on top of that is HiOS which is Tecno’s custom UI. The UI was redefined compared to what was present on the W4 and a few other Tecno smartphones we’ve seen run Marshmallow.

Based on my experience with the device, I would say the user interface sure rocks my boat. It looks more sleek and I also like the fact that apps can easily be categorized into folders thus making everything look neat.

Out of the box, you have some few apps which Tecno consider to be important. Likes of Hi Manager, Hi wallpaper, Hi Theme, Hi Font, Micro intelligence and a few others.

The usual cool gestures available on most sophisticated android phones, didn’t miss out on the Tecno Camon C9 phone. You can double tap to wake up the phone and double tap to put it to sleep. You can quickly launch apps from the lock screen using the set gestures. While music is playing and the screen is asleep, you can simply swipe from one end of the screen to the other to switch songs between previous and next.

The back camera on the Camon C9 smartphone didn’t disappoint. Even in low light. It delivers really good pictures. The front camera in my opinion, isn’t a killer.

Another issue that may not be a biggy with the Camon C9 camera would be the lack of manual settings.

The Camon C9 basically works on Auto settings and there isn’t enough control over how users want the camera to work.

Nevertheless, Tecno sure did well with the phone’s camera but does the camera live up to the hype? Well, You shouldn’t expect pictures close to those Tecno portrayed in the promo videos.

The eye scanner (Iris scanner) on the device is another feature that gets people talking. Now, while the feature on the device seems awesome, it has it’s flaws. It basically work sometimes under sunny conditions but indoors, it barely worked. I literally got tired of the eye scanner which tend to make me feel like I forgot my eyes somewhere.

Having to stop using the eye scanner became a necessity and had to stick to the usual security systems available on Android. I mean, it doesn’t just make sense to stop walking on the road, gaze into your phone screen for a few seconds or more simply because you want to unlock it.

In terms of overall performance, Tecno did well with RAM management. The device works fluid and I barely experienced any lagging through out the whole period of testing. Of course, having too many apps opened in the background leaves the older ones having to re-start when you go back to them and despite having over 40 apps opened, I still didn’t experience any lagging on the smartphone.

For the sake of benchmarks, the Camon C8 scores 34,422 using Antutu benchmark and using Geekbench 3, the smartphone scores 616 under single-core and 2910 under Multi-score.

Battery life on the Camon C9 did well. Although, not the best, it sure met my expectation and probably beyond.

I put the battery across series of test and it certainly didn’t disappoint. Despite playing games with loud background music for hours and thereafter using the Camon C9 as an hotspot device to other devices for a few hours, the remaining juice still took me through the day. If you ain’t an heavy user, you wouldn’t have to charge the Camon C9 everyday.

While the Camon C9 packs a 3000mAh battery and considering the technological era we are in now, it would have made more sense if fast charging feature was made available on the smartphone.

Another worthy accessory is the Pouch which comes with the Camon C9 out of the box. I call it a smart pouch as I can literally see the time easily on the screen with a rather sleek design, switch, pause and play songs easily and even turn on/off the flash light. Unfortunately, that’s all of the fancy things you can enjoy with the pouch covering the phone.

In conclusion, the Tecno Camon C9 smartphone is an awesome phone for a budget price. However, as disclosed in the review, it has it’s little short-comings. Another little con worthy of mention is the loud speaker placement. Tecno, please, we like our loud speakers below the smartphone and not at the back.

If you have any questions or inquiries about the Tecno Camon C9, please feel free to relay using the comment session.

It’s been over a month since we put up this comprehensive review of the tecno camon C9 smartphone. As at now, the smartphone is still very operational and there hasn’t been any major lagging in terms of performance.

However, the HiOS which is Tecno’s custom UI, needs some touches. Deleting videos via the video player doesn’t necessarily deletes the video. Hence, there is a need to go through file manager or gallery to perform deleting.

Additionally, the app freeze feature on the smartphone tends to hide apps when enabled, and having to restore the apps would entail going through the Google Play Store. However, i have written a solution to that effect.

Although updates have been made on the Tecno camon C9 software, these things still hasn’t been fixed. But in all, the Camon C9 smartphone is worth the price it’s been sold for.