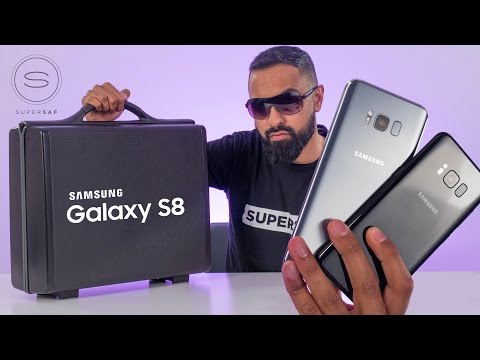 Samsung Electronics have officially unveiled the much anticipated Samsung Galaxy S8 and the S8+.

As you probably guessed, the Galaxy S8+ is a bigger version of the standalone S8. Both devices bring about quite a handful of new features compared to the S7 and the S7 edge released last year.

The interesting similarity however, is the fact that the Samsung Galaxy S8 and the S8+ is IP68 certified. Thus, you can enjoy that water experience with your phone.

The Samsung Galaxy S8 and the S8+ features a display Samsung terms as ‘Infinity Display. It gives you an incredible full screen display. Side bezels no longer needs to come in the way of your smartphone experience.

Both devices this time, rocks an onscreen home button. Other than that, there is an ability to easily multitask. Thanks to the bigger display.

Bixby is also on board. This shouldn’t come as a surprise. For those who don’t know, Bixby is Samsung’s new AI and the AI works seamlessly on the new Samsung devices. Possibly over time, we should have Bixby on some other Samsung Appliances like TVs.

Speaking of the security features, the Samsung Galaxy S8 and the S8+ features a fingerprint unlocking system as well as face recognition system. The new thing here, would be the fingerprint scanner being placed at the back. You can also protect files with the Iris scanner.

There’s also something called ‘Samsung Dex’. This allows users to enjoy a PC-like experience. It’s typically a DexStation. Whether or not this comes as part of the package, isn’t what I can certify at the moment.

On the battery side, while the Samsung Galaxy S8 packs 3000mAh battery, the S8+ packs a bigger 3500mAh battery. Both are non-removable. In addition, there is fast charging (wired or wireless), wireless charging and USB-Type C port.

For more on the spec-sheet and the difference between the Samsung Galaxy S8 and the S8+, take a comprehensive look at the image below.

A YouTuber, Saf, who operates the SuperSaf TV YouTube channel has unboxed both smartphone.

As seen on the video, he didn’t unboxed from a retail box we are quite accustomed to, but from a suitcase. Apparently, that could be as a result of the fact that the device isn’t officially available in the market.

Although pre-orders are currently ongoing, the Samsung Galaxy S8 and the S8+ will become commercially available from the 21st of April, 2017. For the Nigerian market, both devices should be available in the first week of May.